As we’re getting back to business after the Songkran holidays, there has been quite a few significant data releases worth updating. The most important event was the outcome of the much-anticipated FOMC meeting on 16 March, where the Fed decided to raise its policy rate by 0.25% from near-zero level where it had been since March 2020, making this the first policy rate hike in this cycle in over three years to the new target range of 0.25-0.50%. Accommodating the policy rate decision was the update of the FOMC’s economic forecasts, where the Fed is now expecting 2022 GDP growth at 2.8%, a downgrade from 4.0% expected in December; while they are now expecting PCE inflation to be 4.3%, an upgrade from 2.6% in December 2021. Along with changes in their growth and inflation forecast is their policy rate expectation, where they now see Fed Funds rate to finish this year at 1.9% versus just 0.9% that they previously expected during December 2021 meeting. This implies that the Fed is expecting another six increases in 0.25% increments, with obvious risk to the upside, as 7 FOMC participants expecting faster increases, as opposed to just 4 participants expecting slower increases. With many Fed officials already coming out in news to speak in support of larger interest rate increases, we think chances are good that the next FOMC meeting on May 4 will see the Fed hike by 0.5% to the target range of 0.75-1.00%.

About three weeks later, when the Fed released the minutes of the March 15-16 meeting, we also found out their plans on quantitative tightening, whereby Fed officials discussed the plan to reduce the balance sheet by $95 billion per month. Details of the minutes indicated that Fed officials generally agreed on a maximum of $60 billion in Treasurys and $35 billion in mortgage-backed securities (MBS) would be allowed to roll off (i.e. allowing the bond holdings to mature), which will be phased in over three months. The plan does not look aggressive to us at this point, as most of the tightening will involve letting the Treasurys mature. However, some MBS will probably need to be sold in the market due to not enough of the MBS will be maturing. We’re also keeping a cautious stance as this could change, as the Fed could easily step up its tightening effort on higher inflation in the future. 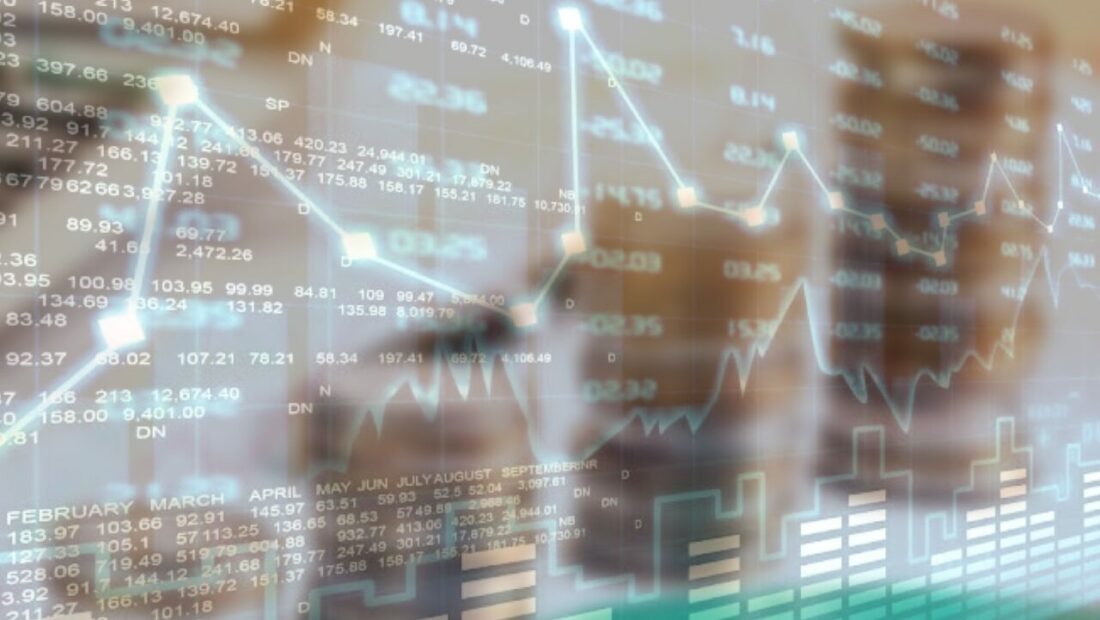 The Bank of Thailand held its own monetary policy meeting later in the month, whereby, the MPC officials decided to hold its policy rate at 0.50%, which had been well anticipated by both the market and by us. Despite the MPC meeting being a bit uneventful, we are increasingly of the view that the dynamics of policymaking in Thailand will be changing in 2H this year. As the Fed steps up its rate-hiking pace this year, where they are on pace to hike a total of seven times, and sometimes by 0.5% instead of 0.25%, it will be increasingly difficult for the BoT to hold its stance. In the past Fed’s rate-hiking cycles during 2004-06 and 2015-18, the BoT was only able to withstand the spread between its own policy rate and the Fed’s by -0.75%, after which point, BoT either had to start hiking or step up the pace. This time around, the BoT will be caught in a dilemma, where they will have to contemplate a tradeoff between the need to keep its policy rate low to provide support for a still-fragile economy, and the need to start hiking as inflation is expected to jump to 4.9% in 2022 from just 1.2% in 2021. Adding on to that dilemma will be the Fed Funds rate that could be ending the year at 2.4%, which will leave the BoT at 2.0% behind where the Fed will be. Therefore, we are of the view that the BoT will need to hike two times by 0.25% in the second half of this year.

Inflation data releases from the US and Thailand came out earlier this month in April, just before we headed out of office for Songkran. US CPI for March increased further to 8.5% from 7.9% the month before. This was quite notable since the month-on-month rate of increase had jumped to 1.2% from the range of 0.5-0.8% seen in the prior few months. Thailand’s CPI also showed a strong increase to 5.73% on the year for March from 5.28% the previous month. This was also notable as inflation was just below 3% in December last year, but had jumped significantly in the year-to-date. We are of the opinion that both the Fed and the BoT have now fallen behind the curve, and the risk for monetary policies of the two economies is that they will be hiking more, not less. 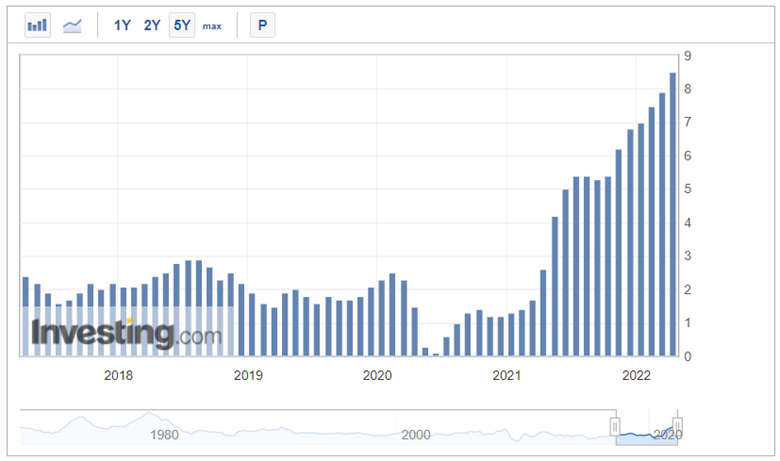 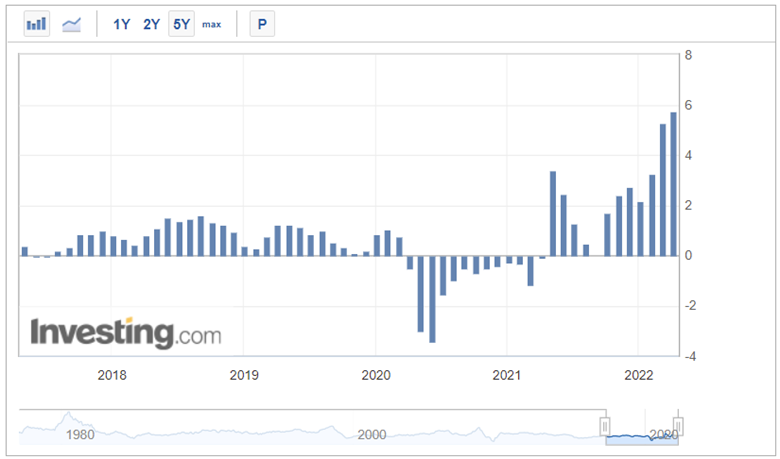 These events have had its effect on markets. US government 10-year bond yields have increased from 2.3% at end-March to 2.8% as of April 14. Thai government 10-year bond yield have also increased from 2.3% to 2.6% as of April 12 (before Thailand went on holiday). Since end-March, US stock market had fallen by 3% (as of April 14), and Thai stock market had fallen by 1.2% (as of April 12), so far in April. Looking forward, it will also be increasingly difficult to justify a long-term investment strategy in stocks, without adjusting down equity exposure via a Multi-Asset strategy funds, or adjusting down holding period via Equity Trigger funds, instead of holding a fully-invested equity funds into year 2023 because the risk of the US going into a recession in 2023 is continuing to increase, which the US yield curve going into inversion has started to signal. We recommend Principal Global Multi-Asset Fund (PRINCIPAL GMA) for a pure global equity exposure of around 70% for investors that want to reduce equity exposure down from 100%, but still want to retain a higher level of stock exposure for long-term upside. For those with lower risk appetite, who prefer to reduce risk further, we recommend Principal Balanced Income (PRINCIPAL iBALANCED) for a mixture of global and Thai equity exposure of around 30%. We also recommend investments in Trigger funds, which we are planning to release in the near future.