For this month’s thought piece, we will take a look at some recent data releases as usual, and in addition to that, we will take a step back and reassess the long term investment case of China, whether it is still considered an attractive place for a long term investment. To start off, economic data releases coming out of the US during August have been mixed with some good and bad numbers. Market participants globally took releases of CPI and Core CPI Inflation releases on a very positive note, with July CPI and Core CPI at lower-than-expected 8.5% y/y and 5.9% y/y; while job numbers such as Nonfarm Payrolls and Unemployment Rate were also reportedly better than expected at 528,000 persons and 3.5%, respectively; and both the Manufacturing and Service ISM were also better-than-expected 52.8 pts and 56.7 pts, respectively. These numbers seemed to suggest that inflation rates can be brought lower, while also keeping economic condition at a healthy level. However, the Manufacturing and Service PMI by Markit Economics, that showed weaker-than-expected 51.3 pts and 44.1 pts, are a clear reminder of the weak demand-side forces that are slowly pulling the US economy towards a recession that we see happening in 1H of 2023. As a reminder of how precarious the market is on the Fed’s policy rate outlook, we have three big data sets that we need to get through before the next FOMC meeting on 21 September 2022.  On Friday, 26 August 2022, PCE and Core PCE for July will be reported; followed by Nonfarm Payrolls and Unemployment Rate for August on Friday, 2 September 2022; and then another set of CPI and Core CPI Inflation for August on Tuesday, 13 September 2022. These are all big set of numbers that have very high potential to move the markets, as well as influence the decision of the next FOMC that will take place on 20-21 of September, which we will find out on Wednesday night in Thailand (or Thursday morning for some of us). 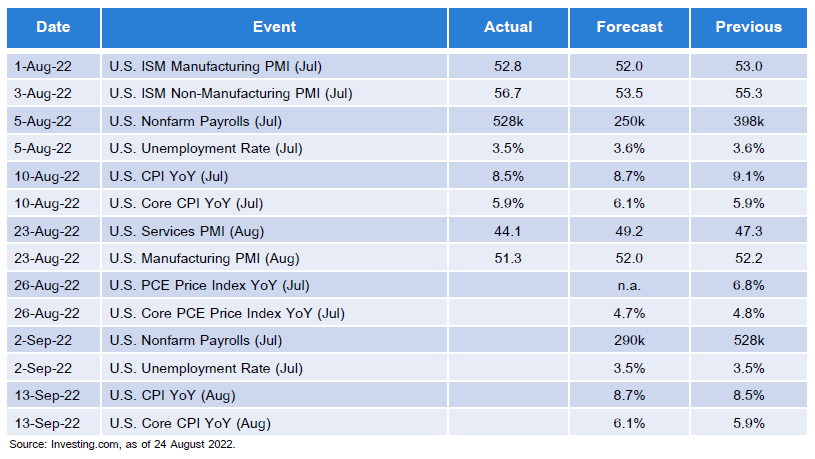 On Monday, 22 August 2022, the PBoC cut its 5-year loan prime rate (LPR) by 15 basis points to 4.3% and lowered its 1-year loan prime rate by 5 basis points to 3.65%. During the week before that, the PBoC cut is 1-year medium-term lending facility (MLF) loans to some financial institutions by 10 basis points to 2.75%. The PBoC also cut the 7-day reverse repo rate by 10 basis points to 2.0%. Even though these cuts are just the beginning and probably won’t be enough, it is a good signal that the PBoC is starting to take actions to stabilize the weak state of China’s economy that is suffering from the ailing property market and the aftereffects of the harsh Zero-Covid policy. Indeed, a slew of economic data out of China during August had been quite weak. Outstanding Loan Growth and Total Social Financing for July had been lower-than-expected at 11.0% and CNY 756.1 billion, reflective of weak credit demand. Fixed Asset Investment, Industrial Production, and Retail Sales for July were also lower-than-expected at 5.7%, 3.8%, and 2.7%. For us, PBoC’s recent rate cut decisions are encouraging signs that things are progressing as we had expected on the policy front.

When we looked at Chinese stocks back in July, the onshore and offshore markets had already experienced a lot of drawdowns over the past year and a half, which had caused market PE valuations to derate to around 0.5 to 1 standard deviation below its long-term mean. This suggests to us that negative factors had already been priced into the stock market. If you take a look at the drawdown levels, both the onshore and offshore market would suggest that a significant portion of bad news had already been priced in as well, with the CSI300 having declined around 35%, the HSCEI having declined around 50%, and the HSTECH having declined around 69% from peak-to-trough. Indeed, a recent study had shown that MSCI China Index had gone through several severe declines in the past on an average decline of 41%, which the current drawdown episode had already exceeded. 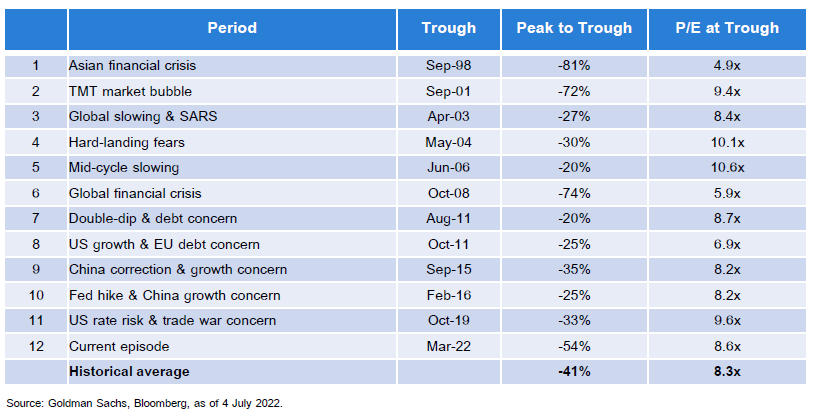 What is perhaps more important than looking into the past is looking ahead for growth opportunities across the global economy. Using IMF’s forecast numbers across the global economy in order to keep things simple, we observed that China and Asia will have the most improvement in growth as we move out of 2022 into 2023. By improvement in growth, we don’t simply mean the absolute level of GDP growth. GDP growth numbers being high does not necessarily translate into positive outlook for the stock market. Whatever the absolute level of GDP growth is, you need that number to be improving, which means that next year growth number needs to be higher than the current year. In other words, high growth is good, and lower growth is bad (and it doesn’t have to be negative). We see a positive development on this front in China, which we do believe that China should be able to deliver as both fiscal and monetary stimulus have been announced. The zero-Covid policy implemented by China should become less and less severe as we move along into next year; while regulations of the internet companies have been abandoned. The geopolitical risk amongst the US, Taiwan, and China will remain a headwind on a very big picture. However, it is extremely important to keep in mind that in approximately seven years, which means just as early as in 2029, China could overtake the US in terms of the size of its nominal GDP. Given how important China is to the global economy, Chinese stocks should also have increasing allocation in the portfolio as well. We recommend

We also recommend Principal China Trigger 6M1 Fund (PRINCIPAL CHTG6M1) which is currently the IPO period of this new trigger fund from 23-31 August 2022. Please refer to below section for the link to the fund’s information on https://www.principal.th/en/principal/CHTG6M1

Chart: Summary of change in GDP growth rates across the world 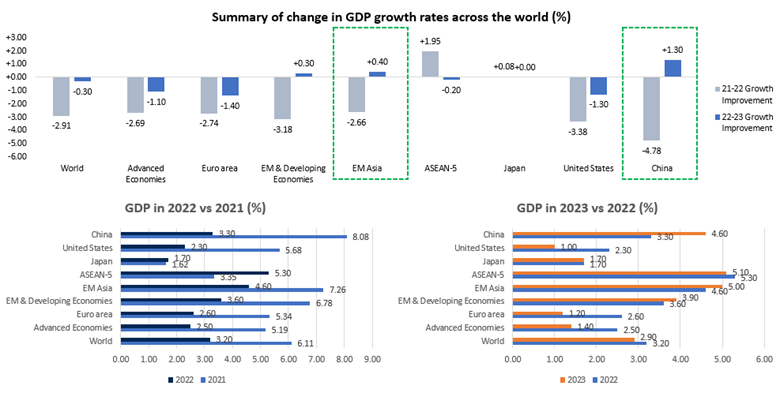 Chart: GDP Size of China vs US